Chelsea have had a disastrous start to 2019 in the Premier League with just 2 wins in 6 games since the turn of the year. The Blues have failed to score an away goal this year and have had a couple of humiliating away days in the past month. Chelsea boss Maurizio Sarri is under pressure and the results have to quickly. Chelsea would be making a massive mistake if they let go of the Italian.

Maurizio Sarri took over the reign from compatriot Antonio Conte in the summer and started his Premier League career by going on a 12-game unbeaten streak. His first loss came at the hands of Tottenham at Wembley as they conceded 2 goals in the first 16 minutes of the game.

The game ended 3-1 with Olivier Giroud scoring a consolation goal late in the match. Chelsea’s home form has been great this campaign as they’ve lost just one game in 13, including wins against Arsenal and defending champions Manchester City.

Chelsea players have had to undergo a huge change in their style of play with Sarri’s football being very different from Conte’s. Sarri’s high-pressing game takes a lot out of players and is something that cannot be mastered overnight. The fundamental style of Sarri’s build-up play involves possession of the ball between the centre-backs and the defensive midfielder.

The defensive midfielder, in this case, Jorginho, started the season off brilliantly but has been found out in recent games, especially against Arsenal when he was man-marked by Aaron Ramsey. Jorginho’s poor form continued in the drubbings against Bournemouth and Manchester City where they lost 4-0 and 6-0 respectively. 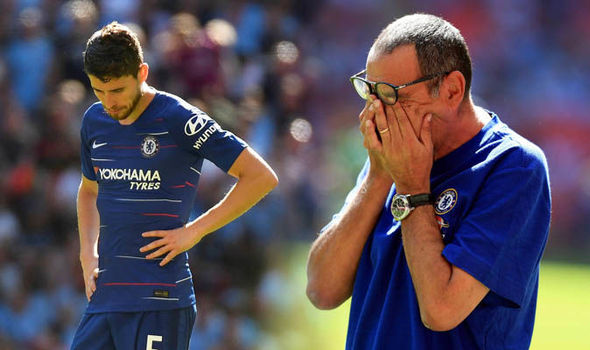 Although Chelsea currently sit 5th in the table, they are just a point off 4th-placed Manchester United. The Blues are also one of the favourites to win the Europa League as they take on Malmo this week. Their domestic cup pursuits are also going on as Sarri’s men take on Manchester City again in the final of the EFL Cup. The Blues also face Manchester United in the FA Cup on Monday.

Chelsea owner Roman Abramovich has the history of sacking managers but the Russian needs to give Sarri at least another season before making a call. Sarri, with a good transfer window in the summer, and with time to make the players play to his needs, will make Chelsea title contenders again. With the Blues still in the run for three trophies and Champions League qualification, sacking him would be a terrible decision by the club and will take them a few steps backwards.

Check out all the Football TV Listings to catch the Premier League clubs in action. The Argentine spent five seasons at the club, three of which were spent out on loan. He will make 73 appearances for Chelsea while scoring 25 goals and making four assists. (h/t Transfermarkt)

He was a part of the Chelsea side that retained the Premier League title in 2006, the first league title of his career.

Crespo was a complete striker, who possessed good technique, composure, and an eye for goal., He was also a dominant presence in the air. His stoppage-time winner against Wigan Athletic on the opening day of the 2005-06 campaign will live long in the memory of the Blues faithful.

A number of fans took to Twitter to reminisce about the striker’s brilliance on his birthday. We take a look at a few of them below.

Herman your goal at Wigan was my favourite 👏👏💙 #cfc

That last minute strike against Wigaaaaaaan

Happy birthday you you goal hitter of that time

Happy Birthday to @Crespo. A player that doesn’t get spoken about enough in my opinion. Was fantastic in the title winning 2005/06 season coming back off a loan. Scored some fantastic vital goals as well. Loved his passion when scoring goals. Great player! 👏

Do you recognize the geezer in the background?
It’s super Frankie!!!

I still remember his first goal of the season against Wigan in the last minute of added time. Was sensational

According to the Independent, Chelsea boss Frank Lampard is keen on integrating Hakim Ziyech and Timo Werner into Chelsea training.

The duo is set to move to Stamford Bridge after Chelsea beat off rivals to the highly coveted duo. They will, however, be ineligible to take part in our remaining fixtures this season. The earliest they can don their blue jersey is next season.

As Liverpool and Manchester City have shown over the last two seasons, every point matters in the English Premier League. It is imperative that we ensure that the duo hit the ground running.

Bring incorporated into the training sessions will clearly help achieve that goal. With a lot still to be played for, our players will also benefit from going up against these world-class stars.

Ziyech has not played since the Dutch league was cancelled. Ensuring that he is up to speed when it comes to match fitness is of utmost importance.

“We will formulate a plan for them that will look slightly different individually.”

The Blues wasted no time in securing two of the sought after players in European football. This infusion of fresh blood will give us the edge over our rivals while it will also help us close the gap to the top.

Lampard understands the importance of getting the duo up to speed. He is keen to ensure that fitness and freshness levels for next season are attained.

By easing the duo into the Chelsea system, we will steal a march on our rivals. By the time next season rolls around, both Werner and Ziyech will already be familiar with the way we play.

The fact that we can get the bedding-in period out of the way should give us a competitive advantage on the pitch. Chelsea have taken the first step in an attempt to sign Brazilian playmaker Philippe Coutinho. According to reports in Spain (h/t Mirror), the Blues have already entered negotiations with the midfielder’s camp over the possibility of a summer transfer.

Coutinho moved to Barcelona in January 2018 from Liverpool. But the 27-year-old has endured a difficult time at Camp Nou. Having failed to make the desired impact, he was shipped off on loan to Bayern Munich last summer.

Bayern Munich have no intention of signing Coutinho on a permanent basis. And Barcelona, too, are keen on offloading him, as they look to generate funds to sign Lautaro Martinez and Neymar in the summer (h/t Mirror).

This has sparked a lot of interest among the Premier League clubs, with Manchester United, Tottenham Hotspur and Arsenal all interested in signing Coutinho (h/t Mirror).

The report claims that our club has already made the initial move to try and sign the 27-year-old, by opening negotiations with his agent, Kia Joorabchian.

It is believed that Chelsea have a good relationship with Coutinho’s agent, which is likely to give us the edge in the race to sign the Brazilian (h/t Mirror).

Our first season under Frank Lampard has been a solid one, considering that there was no investment made over the last two transfer windows. We are currently fourth in the Premier League table.

But for us to take the next step and bridge the gap on the likes of Liverpool, new players need to be brought in.

Coutinho, despite his malaise at Barcelona, remains a quality player with a proven track record in the Premier League. It remains to be seen if we are able to get our hands on the Brazilian though. 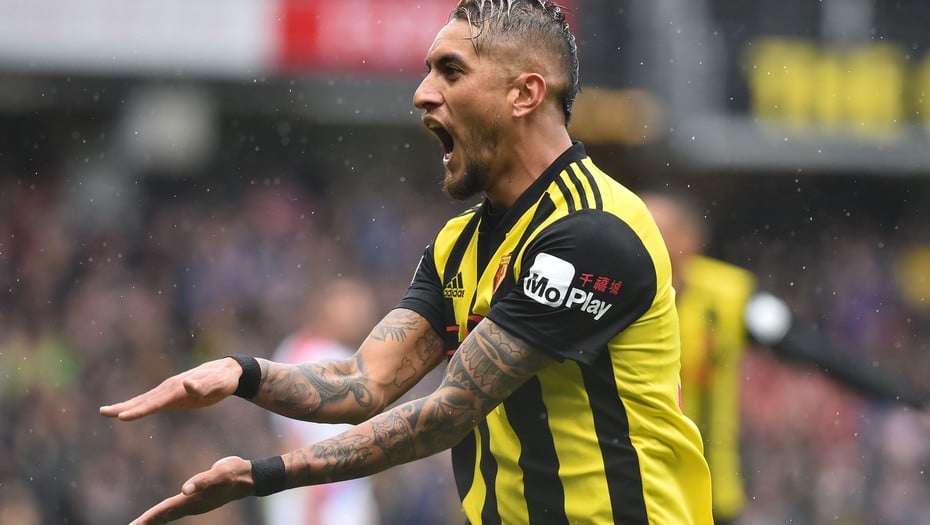 Chelsea should not hesitate to sign Roberto Pereyra in January

According to The Sun, Chelsea are interested in signing Watford’s Roberto Pereyra should Eden Hazard leave the club next summer.

The 27-year-old Belgian maestro is contracted to Chelsea till the summer of 2020 but he is yet to commit his long-term future to the club. There has been a lot of speculation in recent times and if you are one of the daredevils to palce a bet based on rumours, betyetu coupon code offers you a fair price to have a dig at the transfer market odds with regards to a move to Real Madrid.

Roberto Pereyra made his move to Vicarage Road back in 2016 from Serie A giants Juventus and has established as one of the star players at the club. He wasn’t a regular starter in his first two seasons in England but the 27-year-old has started all of Watford’s eleven games so far this term in the Premier League. The Argentine international has been one of the cornerstones of the Hornets’ early-season success, scoring five goals and providing a couple of assists.

Javi Gracia has brought the best out of him by deploying him in his favourite wide left position in the final third, allowing the Argentine to inject that much-needed creativity into Watford’s attack.

Chelsea have made a bright start to the season under new manager Maurizio Sarri. The Blues sit second in the Premier League standings, ahead of Liverpool on goal difference and just a couple of points behind league leaders Manchester City. The Blues are the only team in the top flight to remain unbeaten across all competitions, proving that they are very much in the title race this season.

Eden Hazard has been the star performer for the Blues this season, scoring seven goals and setting up another four. Maurizio Sarri’s free-flowing possession-based football has brought the best out of the Belgian and undoubtedly, he is Chelsea’s indispensable weapon in the final third and the heartbeat of the forward line. He is Chelsea’s go-to man and a virtually irreplaceable component of the team. 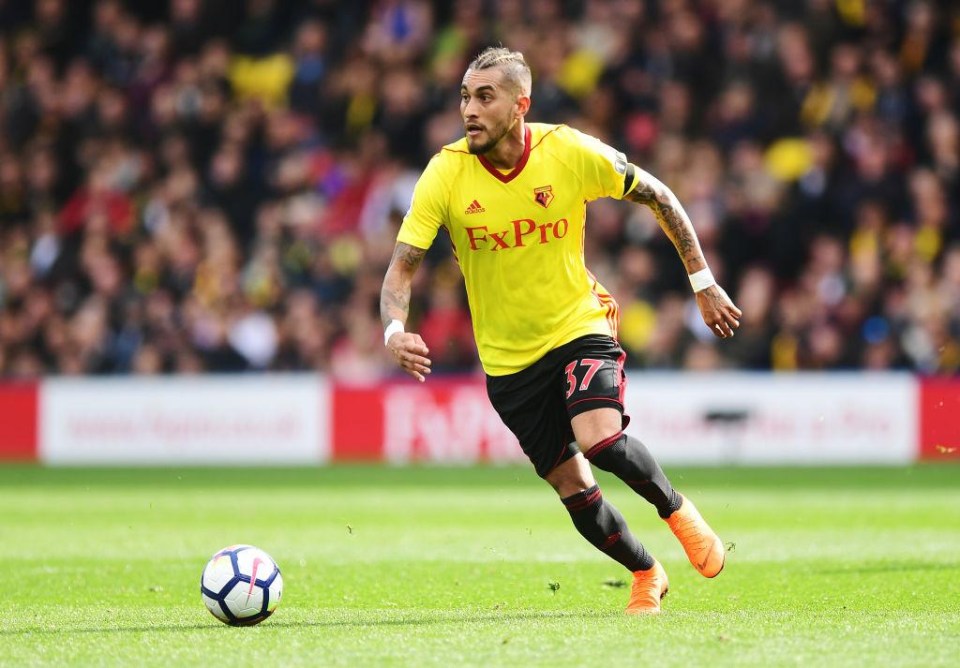 As for Roberto Pereyra, he is a very talented attacking midfielder but the Argentine cannot be an ideal replacement for Eden Hazard, at least, at least not in terms of impact. Irrespective of what the future holds for Hazard at Stamford Bridge, Pereyra would definitely be a fine addition to Chelsea’s midfield and a perfect fit for Maurizio Sarri’s tactical game.

Chelsea need another creative midfielder in their ranks for the No.10 role as N’Golo Kante has proved that he is not a good fit for a central attacking midfielder. Cesc Fabregas has been short of playtime this season and the Spaniard is likely to depart the club when his contract expires next summer. Mateo Kovacic has done a good job in a box-to-box role but his loan deal does not include an option to buy and he is likely to return to Real Madrid at the end of the season.

Hence, Chelsea will need to bolster their midfield options in January or next summer and Roberto Pereyra would be a good choice. A technically-gifted and tactically versatile attacking midfielder, the Argentine is capable of playing on either side of the attack and also through the centre as a supporting striker. He has exceptional close control and uses his remarkable vision to set his teammates into free spaces with incisive passes. He is not someone who contributes greatly with goals and assists but he is the sort of player who likes to build up the play, work the channels in the final third and get into good positions. In other words, his tactical awareness and intelligence combined with his technical abilities make him a valuable asset to the team. 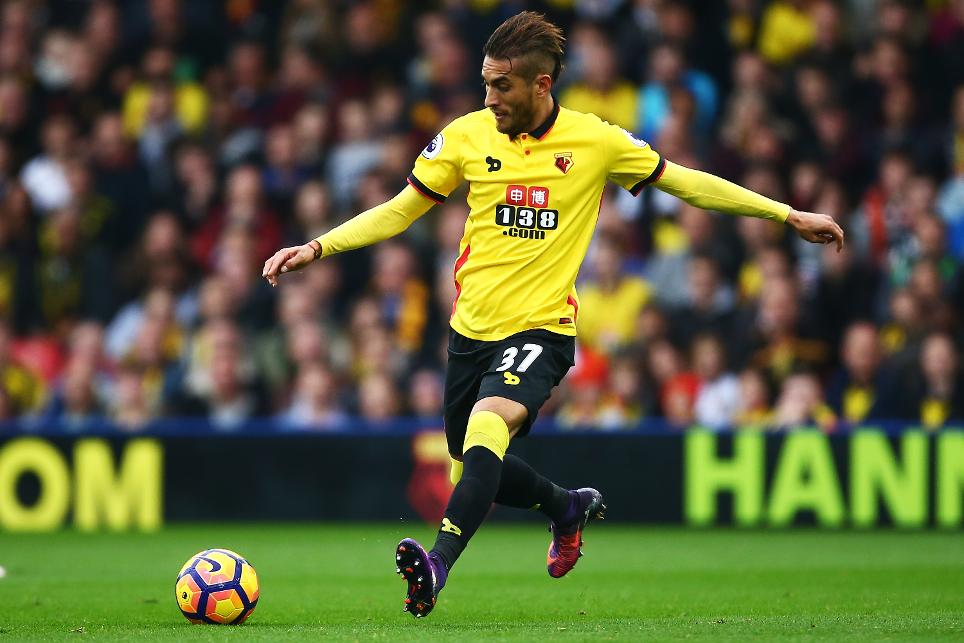 Apart from that, Pereyra is a fleet-footed player who likes to use his dribbling skills to take on defenders in one-on-one situations. Deployed in a wide position, he has the ability to cut inside or link-up the play with short quick passes.

That said, Pereyra might not be a good replacement for Eden Hazard but he has all the attributes to fit into Chelsea’s first-team.