Chelsea take on Sheffield Wednesday in the fourth round of the FA Cup, with Maurizio Sarri expected to give some playing time to fringe stars.

The Blues won the Carabao Cup semi-final tie against Tottenham on Thursday to fix up a game against Manchester City for the first major silverware this season.

Sarri could field loan signing Gonzalo Higuain after the Argentine joined the Blues recently. Chelsea should start the tie as favourites, and playing at Stamford Bridge will provide us with a boost too.

The Blues then face Bournemouth in the Premier League in midweek.

Kepa Arrizabalaga was the saviour in the shootout against Spurs, but Sarri should provide Caballero with the start on Sunday. The Italian should get a run-out against the lower league side, and give Cesar Azpilicueta a break.

The Brazilian has been a rock at the back for Chelsea this season. There is no reason to replace Luiz now, even if Andreas Christensen returns to fitness.

Gary Cahill seems to be completely out of the picture, and we should keep Rudiger in the starting XI.

The Italian did a great job in the win over Spurs and should keep his place in the team ahead of Marcos Alonso.

The youngster deserves some game time in the first-team, and this would be the ideal opportunity to test him against the Championship opposition.

The Englishman has been in and out of the team this season, but he is expected to start on Sunday.

Kante scored a triple-nutmeg goal against Spurs and should keep his place in the starting XI. The Brazilian hasn’t been in great form in recent weeks. However, he should get the nod against Wednesday.

The Argentine arrived a bit late to feature against Spurs, but he is ready to make his Chelsea debut on Sunday.

The youngster should get a chance to impress against Wednesday, and it will be interesting to see how he performs on Sunday. 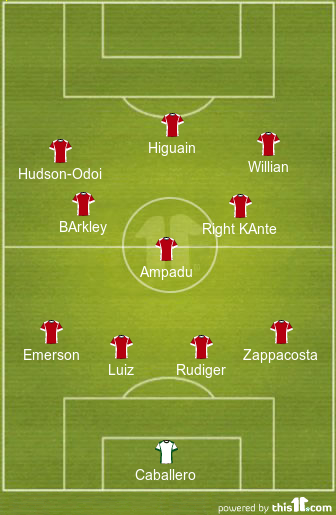 An interview from Alex Crook of TalkSPORT (h/t Daily Star) revealed that West Ham United could be interested in signing Chelsea striker Olivier Giroud in the January transfer window.

That game was only his second start of the season for Chelsea, and the Frenchman would have been dejected to hear Lampard say that it was still not enough to grant him a start against Leeds United. (h/t Daily Star)

It is now understood that Giroud could move to London club West Ham United in January in order to secure game time as the 2020 UEFA European Championship next summer draws near.

TalkSPORT insider Alex Crook said in an interview that West Ham United may hold the edge over Tottenham Hotspur, another club interested in signing Giroud, as the Hammers would not be considered a ‘direct rival’.

“I know there’s interest from West Ham United. David Moyes is a huge admirer of Giroud and clubs abroad as well. I suppose where West Ham would have the edge over someone like Tottenham for example, who have also shown an interest in the past, is that they wouldn’t be viewed as direct rivals.”

Giroud has been at Stamford Bridge for the past three and a half seasons where the Frenchman has netted 34 goals in nearly a 100 games.

Unfortunately for him, the 34-year-old has found starts at Chelsea few and far in between in recent years as he has started just twice for the Blues so far this season.

Giroud could also only muster 17 starts from 55 games last season for Chelsea, but Lampard indicated why he has chosen to keep him at the club as he praised him after the win against Sevilla. According to Italian outlet Mundo Udinese via Sport Witness (h/t Daily Star), Chelsea are still interested in Udinese goalkeeper Juan Musso, in spite of having signed Edouard Mendy in the summer.

The 26-year-old Musso came through the ranks at Racing Club in his homeland Argentina. After 34 first-team appearances, the custodian was snapped up by Udinese in the summer of 2018.

Since moving to Italy, Musso has racked up 76 appearances for Le Zebrette managing to secure 23 clean sheets in the process. The one-time capped Argentine international has featured in eight games this term, keeping two shut-outs.

The report claims that Musso had registered on the radars of Chelsea earlier this year when Kepa Arrizabalaga and Willy Caballero were struggling to nail down a place in the first-team.

However, the club did not pursue the Argentine in the summer. Instead, we ended up signing Edouard Mendy from Ligue 1 side Rennes. And the 28-year-old Senegalese has been a huge hit at the Bridge.

In 12 games across all competitions, Mendy has managed a highly-impressive nine clean sheets. With him in the side, the Chelsea defence has massively improved this season.

However, that hasn’t stopped Chelsea from monitoring Musso, who could be sold in the next summer transfer window. (h/t Daily Star)

With the club understood to be ready to part ways with Kepa and Caballero touching 40, a new goalkeeper could be needed once the season ends.

And Musso, who is valued at around €30m (£27m), could be an intriguing option for the club to consider. Speaking in an interview with Chelsea’s YouTube channel (h/t Metro), new signing Kai Havertz revealed that Timo Werner texted him ‘everyday’ in a bid to convince him to join Frank Lampard’s Chelsea.

Werner was thrilled at the prospect of Kai Havertz joining him at Chelsea and incessantly texted him to get him to Stamford Bridge.

It was not long after signing Werner that Chelsea agreed on a deal for Kai Haverz with Bayer Leverkusen.

Chelsea finalized a £71m fee with the Bundesliga club which saw the 21-year-old German International arrive at Cobham in September 2020.

Speaking in the interview, Havertz admitted that his friend Timo Werner already being at Chelsea made the move a lot easier for him. He also revealed how the 24-year-old striker texted him every day in order to get him to the club.

“It helped a lot. We know each other well from the national team. We’ve always been big friends. When I got the news that he would change [clubs] of course we messaged like every day. He always said to me, ‘come, come!’, it was like every day.”

Havertz also mentioned how he is close to the German-speaking players at the club while also mentioning how learning English has helped him have cordial relationships with everyone in the squad.

Kai Havertz has had a good start to his Blues career. Despite missing almost a month of football due to testing positive for Covid-19, the young German star has still managed 4 goals and 3 assists in his 13 Chelsea appearances this season. (h/t Metro)

Chelsea are 3rd in the Premier League table, trailing both Tottenham and Liverpool by 2 points, as we welcome Leeds United at Stamford Bridge. It will be an interesting clash as the Whites have shown their quality this season.