The Chelsea players celebrate a goal

Chelsea needed a late Eden Hazard winner to see off Bournemouth in the quarter-finals of the Carabao Cup. The Blues will face Tottenham in the semi-finals of that competition. However, all our concentration is towards the next league game against Leicester City at Stamford Bridge.

The Foxes are a tough team to face as their performances are unpredictable, but we should start as favourites for the tie.

Maurizio Sarri’s men are currently 11 points behind leaders Liverpool and this would be an easy clash to pick up three points.

The manager might shake things up in selection as the hectic Christmas schedule kicks in. Here is our predicted line-up for this game:

The Spaniard would want to keep a clean sheet against Leicester and perform well in between the sticks.

Azpilicueta was surprisingly played in midweek, but the Spaniard won’t get any rest and should continue as our right-back.

The Brazilian was brought on to replace Andreas Christensen against the Cherries, and he should start on Saturday.

Rudiger was another player who started in midweek. He has been an ever-present in league games though.

Alonso hasn’t been in the best of forms in recent months, but he is a better option down at left-back than Emerson Palmieri. The French midfielder was rested against Bournemouth, but the Chelsea dynamo should start on Saturday.

The Italian didn’t play against the Cherries but should be back in the side on Saturday.

Barkley deserves more minutes on the pitch and with the festive schedule around the corner, Sarri could be tempted to give Mateo Kovacic a break and start with the former. Willian hasn’t looked great for us this season, and the Brazilian should be replaced by Pedro on the right-wing.

Giroud is our only fit striker at the moment, and he should start this game against the Foxes. His physicality and hold up play could be crucial for us.

The Belgian didn’t start against the Cherries and made the difference from the bench. However, he starts every league game. 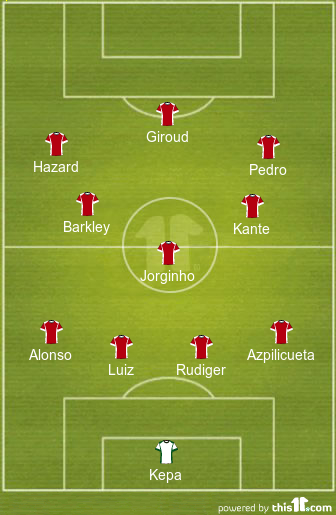