Chelsea have a tough game on their hands with Manchester United visiting Stamford Bridge on Saturday.

The Blues are unbeaten in all competitions and are placed second on the Premier League while United are struggling for form under Jose Mourinho.

Chelsea have been excellent, thanks to Eden Hazard’s form. The Belgian could decide this big game’s outcome this weekend.

Maurizio Sarri has got the team playing some great football. Barring any injuries, we should field the strongest line-up against the rivals. Here’s my predicted XI for the game:

Kepa was on the bench as England beat Spain during the international break, but the Chelsea keeper will be back to face United.

The Spanish defender has to be at his best if he is to go up against the likes of Marcus Rashford and Alexis Sanchez.

Luiz will have to face the might of ex-Chelsea player Romelu Lukaku, and it could be one of the key battles of the game.

The German had a slight niggle before the international break and decided to skip playing for Germany. He should be fit for the game against the Red Devils.

Alonso is one of the best left-backs in the Premier League. His runs on the left-hand side could prove vital on Saturday.

We are slowly witnessing the best of Kovacic under Sarri, and hopefully, the Croatian sets up a goal or two on Saturday.

The midfielder will set the tempo of our play with his passing and pressing off the ball to keep the pressure on the opposition. The midfielder is expected to do his regular job as one of our advanced players in the middle of the park.

The Belgian is easily the best player in the league and if anyone can destroy United, it has to be him.

Giroud is yet to find the back of the net for the Blues this season, but he will be vital in creating chances for Hazard and other runners.

Read more: “Needs to bin De Gea asap” – Some fans believe this Chelsea star is ready to become Spanish No.1

The Brazilian might not be banging in the goals like Hazard, however, his pace and work rate will be crucial against United. 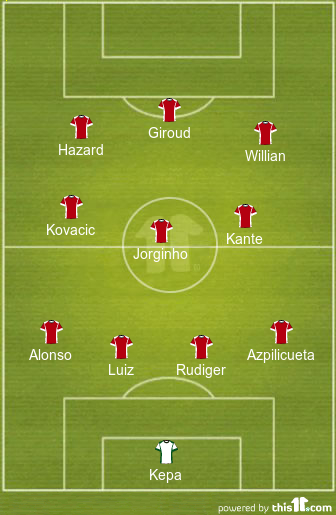