Unbeaten Chelsea continue their Carabao Cup run as they face Derby County at Stamford Bridge in midweek. The game will be a little special as former Blues legend Frank Lampard will be on the opposition touchline barking instructions at Derby players.

Maurizio Sarri should rotate his side, like he has done all season, for this competition. However, Derby cannot be taken for granted as they defeated Manchester United at Old Trafford in the previous round.

Chelsea beat Burnley 4-0 in the previous game, and it would be great if we can produce a similar result with our rotated side. Here is our predicted line-up against Derby.

Kepa has played every game of the season barring the Community Shield and is growing in stature between the sticks. Zappacosta should replace Cesar Azpilicueta, with the latter getting a rest. The former has looked in decent form during the Europa League games.

The Englishman would be eager to impress the manager again with a solid performance.

Christensen hasn’t got much playing time thus far, yet he can slot back in the team if he keeps performing well in cup games.

With Marcos Alonso expected to get a rest, we should see Emerson starting. The Brazilian has done well in previous games. The Spaniard hasn’t started a league game this season. However, his experience could be vital in knockout cup ties.

Kovacic was on the bench for the game on Sunday. Hence, he should be fresh enough to start on Wednesday.

The Frenchman is a regular starter but may get a nod for this game as well, in the hope to sub him off later after making the game safe.

The Englishman was brilliant in our Europa League win and with Pedro carrying a knock, he seems to be a guaranteed starter against Derby. With Alvaro Morata starting to score goals, Giroud might need to score in this cup game to keep the competition going.

The youngster could start because Sarri is expected to rotate. Hudson-Odoi has just 30 minutes of Europa League football to his name and could do with some minutes on the pitch. 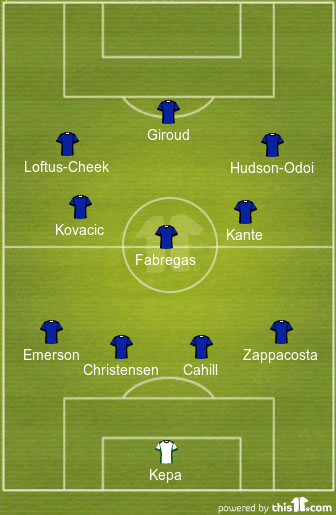 “Future captain”, “The next Frank Lampard” – Some Chelsea fans go crazy after star scores in 4-0 win over Burnley