Chelsea welcome Burnley at Stamford Bridge on Monday as we aim for a place in the Champions League.

We have experienced a mixed campaign in 2018/19 but remain close to Tottenham, Arsenal and Manchester United as the four sides battle it out for the remaining two Champions League spots.

Maurizio Sarri’s men enjoyed a three-game winning streak before Liverpool ended our run at Anfield last weekend. But Chelsea will be hoping to resume to winning ways in the Premier League against Burnley after booking a place in the Europa League last four.

Antonio Rudiger, as expected, missed the game the Europa League win over Slavia Prague with a knee injury and will be sidelined for the game against Burnley as well.

Other than him, Ethan Ampadu and Marco van Ginkel remain out injured.

Kepa is Sarri’s first-choice in goal and should keep his place in the starting XI.

Azpilicueta has been a regular fixture at right-back for the Blues this season. Expect him to retain his place in the team. Luiz has been on and off this season but needs to step up with some crucial games coming up.

With Rudiger out injured, Christensen will keep his place in the starting XI. The Dane has done well in the last two games but will have to be at his best against Burnley’s physical forwards.

Emerson has ousted Alonso as our first-choice left-back in the recent few weeks. The Brazilian should undoubtedly keep his place in the starting XI.

He has struggled to live up to the expectations at the Stamford Bridge since joining from Napoli last summer. Sarri, however, will hope his midfield maestro to do well against the Clarets.

Kante has played out of position under Sarri and yet has done well. Expect the diminutive Frenchman to start on Monday too.

Loftus-Cheek provides more energy and physicality to our midfield than Barkley and Kovacic. After sitting out the Europa League win over Slavia Prague, expect Sarri to recall him against Burnley.

Pedro was excellent against Slavia Prague and deserves to start in the Premier League fixture on Monday as well. Our best attacker on any given day, Hazard has to be at his sublime best if we are to win all three points next week.

Read more: “I am frustrated when not on the pitch” – Chelsea star demands more game time to continue at Stamford Bridge

Giroud has constantly proved why he deserves to start ahead of Higuain but Sarri has ignored his calls. Maybe, our manager starts the Frenchman against a physically-dominant Burnley side. 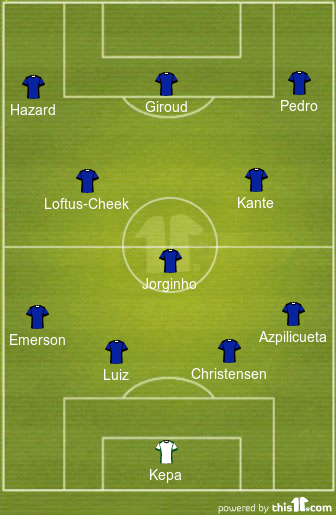